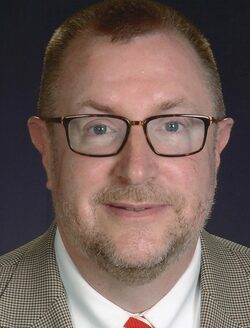 I was born the son of a preacher in the spring of 1963 in Indianapolis.  And so I was in church on the first Sunday of my life, and nearly every Sunday thereafter.  When I was seven years old, I believed that I understood what it meant to be a Christian and talked with my parents about being baptized.  The only thing I remember about my baptism is that when I returned home from it, I went to my older sister and insisted that I was better than she, since I had been baptized and she had not.  Clearly, I missed the point.

It is true, however, that I spent a good part of my growing up years insisting that I was better than my two older sisters.  When I left home for Indiana University in 1981, however, I proved myself to be just as bad as they were.  Being away from home meant I could do things and my parents would not find out about them.  This was a new experience for me, and my life became wine, women, and song—but mostly wine and song.  Although my father had suggested that I get involved with a campus ministry sponsored by his denomination, I found their Sunday gatherings to be trivial and boring.  So I only attended church when I went home for the weekend.

By Christmas of my freshman year, the Lord had placed in me a desire to get back into church.  At the advice of a friend from the marching band, I began to seek out a church, not a campus fellowship, when the new semester began in January.  The Lord directed me to a small church on the south side of town, primarily because they advertised transportation and I didn’t have any.  The church was exactly what I was looking for—and the preacher had a style I was not very familiar with.  He simply opened up the Bible and explained it.

I had gone to Indiana as a broadcast journalism major—hoping one day to replace Dan Rather.  My grades in journalism, however, were far from stellar, and I decided during my sophomore year to pursue graduate school in English instead.  Graduate school, however, meant that my grades needed to improve, and I had already proven that I could not get good grades on my own. 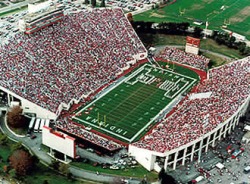 And so I sought help.  One night, as I was running laps around the football stadium, I grabbed the fence and made a deal with God.  I promised that I would read my Bible every day if He would help me get good grades.  I knew it was a good thing to read your Bible every day, because I had seen my mother doing it all of my life.  I had not, of course, tried it myself.

Since I was a preacher’s kid, I started in Revelation.  I saw no need to read things I already grasped, or thought I grasped.  Revelation whet my appetite, however, and I ended up reading through the entire Bible—the King James Version—in about eight months.  As I read, I realized that the God of the Bible was no One to be making deals with.  He had done much more for me already than I could ever repay, and I repented of my lifelong self-righteousness.  The sermons at church began to make more sense to me, and it eventually sank in that my “good” life had not really been a Christian life—for I was trusting in my works, not Christ’s.

I graduated from Indiana in May of 1985 and went to graduate school at Miami of Ohio.  There,I got involved with InterVarsity Christian Fellowship. (The photograph to the right is Upham Hall, where I taught Freshman English a couple of times during my two years as a graduate assistant at Miami.)  I was asked to be the IV chapter president during my second year at Miami.  InterVarsity had a great tradition at Miami, and the Lord changed the course of my life.  Rather than continuing to pursue an advanced degree in English, I headed for vocational ministry. 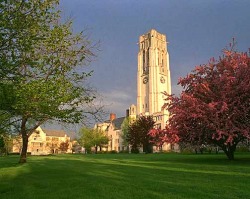 In the summer of 1987, I joined the staff of IVCF and moved to Toledo, Ohio, where I was the primary staff member responsible for the IV chapter at the University of Toledo.  The Lord led some very strong student leaders to the group during my tenure at UT, and we saw the group grow from about 20 students to over 80 students.  The group was known for its bold evangelistic efforts on campus.  Two of the chapter presidents I worked with are now on the mission field (one in Ukraine, the other in China); another is on the faculty at the University of Illinois. 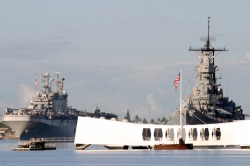 In the early 1990s, following the Gulf War, the Lord laid on my heart a desire to be involved with military personnel.  That desire came to fruition in 1994 when I joined The Navigators US Military Ministry.  After several months of fund raising, I moved to the Hawaiian Islands to minister among the Navy and Marines stationed on the Island of Oahu.  I worked alongside Navy Chaplains at the Pearl Harbor Naval Station and Submarine base, and the Marine Corp Base at Kaneohe. It was at Pearl Harbor that I first got involved in Brig ministry.

In late 1997, the Lord made it clear that it was time to leave full-time Navigator staff and join the ranks of the working world.  With the help of The Navigators, I moved to San Diego in April 1998 and began looking for work.  Over the next four years, I worked a number of contract jobs—mostly connected with Internet companies.  I remained with The Navigators as Associate staff and continued to do Brig ministry—meeting man-to-man with a couple of men who had become Christians at the Pearl Harbor Brig, and leading a Bible study on Wednesday evenings—in my spare time.

By early 2002, it seemed the Lord was blessing the ministry in such a way that I should consider doing it full time.  In addition, I saw a need which is not being met either by the church or by most of the prison ministries.  No one seems to be helping inmates who become Christians while incarcerated make the transition from the prison to the Church.  And so in September of 2002, I set out by faith to establish the Hebrews 13:3 Project, a mentoring ministry pledged to help prisoners both inside and outside the brig walls—that they might experience real freedom in Christ, and yet have real accountability.

The Project continues to impact incarcerated military personnel, and to mentor a few as they are released, although it has never developed into a full-time ministry.  I continue to volunteer with the Navigators at Navy commands, and do other consulting work with Red I Consulting Services, Inc.

In June of 2012, the Hebrews 13:3 Project began an expansion that involves mentoring released offenders.  For more information, please click the "PRO Mentors" link above. 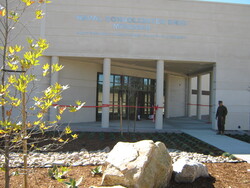